Many users choose the original vertical cone mixing equipment in the field of powder and Powder Mixing Equipment. However, experts suggest that due to the many shortcomings of the vertical cone mixer and the high maintenance rate, the powder/powder mixing equipment When mixing bulk or granular materials, a horizontal mixer should be selected. This equipment has high mixing efficiency, good mixing quality, short discharge time and less residual volume. However, the following points should be paid attention to when choosing and using a horizontal mixer: 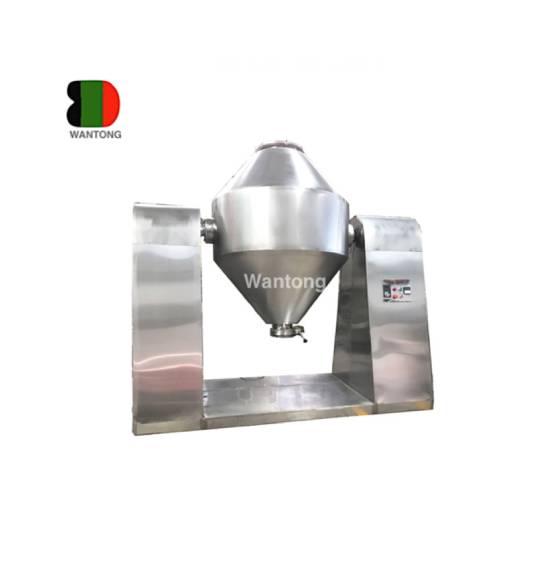 3. According to the design principle, the gap between the spiral belt and the shell in the spiral belt mixer can be 4 mm ~ 10 mm, and the materials can be driven by friction to participate in the mixing. However, due to the difference in the crushing particle size and the friction coefficient of the materials, the time for the materials of various components to participate in the mixing is different, resulting in unevenness of the product. At present, some manufacturers have realized this and made improvements to their products. One is to pay attention to the machining accuracy to reduce the bottom clearance to about 3 mm; the other is to make the position between the spindle and the housing adjustable, and the gap between the spiral belt and the housing can be adjusted frequently according to the amount of wear. . When choosing a mixer, these two forms of products should be the best choice.

4. When choosing a horizontal spiral belt mixer, pay attention to the discharging method. You should communicate with the Mixer Supplier in time to choose the valve form suitable for your process, and do not choose the side-port discharge form. The reason is: when the mixer completes the mixing and mixing within the specified time, the uniformity of the material can be guaranteed by clearing in the shortest time; if the side spiral belt is used to gradually clear, one is the delay of time and the expected productivity is not reached, and the other is The material has reached the best uniformity. Excessive stirring will cause the material to segregate and destroy the uniformity, thus losing the meaning of choosing a horizontal mixer.

5. Pay attention to the order of feeding when using a horizontal mixer. Generally, an agglomerate, such as corn flour, soybean meal, etc., is first thrown, and then a small component, such as a premix. Note that the premix must not be fed by a screw elevator, and one-time tipping bucket feeding or manual feeding is used to avoid the segregation and loss of the effective ingredients in the premix.

6. When using a horizontal mixer, the batch should be fed after the mixer is started. Don't stop the machine at the end of mixing and discharging, and mix a batch after discharging the net material. If it is restarted after full load, the power distance will be too large and the motor will be burnt.

Choosing a suitable Horizontal Mixer and using it properly will significantly improve the quality of the mixture and will soon reflect a benign effect in the production process. If you can further master the technology of self-mixing materials, you can also greatly reduce the cost of materials, thereby increasing profits

Previous: Why Use a Double Cone Blender and What are The Key Advantages

Next: Do You Know The Double Cone Mixer?