What Are The Types Of Powder Mixers?

The powder mixer is suitable for mixing powder or granular materials in chemical, food, medicine, feed, ceramics, metallurgy and other industries. 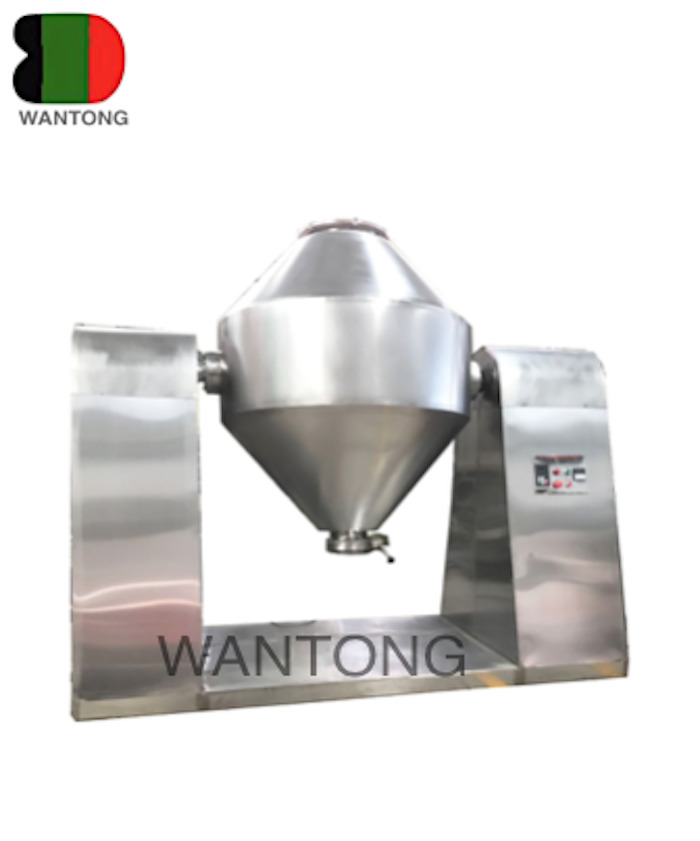 From the perspective of the mixing effect, the three-dimensional and double-cone mixing effect is the best, but the price is more expensive. The V-type mixer is the second, and the price is moderate. V-type mixer that can achieve the effect in some places where fine mixing is not required. The barrel of the machine has a unique structure, uniform mixing, high efficiency and no accumulation of materials. The whole machine has simple structure and easy operation. The outer surface and material contact parts are made of high-quality stainless steel, with beautiful appearance, convenient maintenance and cleaning.

V Type Powder Mixer adopts a V-shaped asymmetric barrel, which mixes powder materials or granular materials with good fluidity, and the effect is better. This mixer is an unequal-height mixing barrel combined with a barrel sectioned at a 42-degree angle. It has a better mixing effect than a general double-cone (W) type mixer, and the central shaft is supported by the two boxes of the base. During work, the bucket rotates around the same horizontal axis from the same rotation speed, so that the materials can be turned up and down continuously. According to the special requirements of users, a compulsory mixing device is set in the mixing bucket, which plays the role of dispersing the materials during the mixing process, so that the mixing time can be shortened and the materials can be more uniformly mixed.

There are three major factors that may affect the mixing effect of the mixer. The Ribbon Mixer supplier can tell everyone. Separation is often accompanied by the mixing of various solid materials in the mixer. Segregation is the opposite process of particle mixing, which prevents good mixing, and can also re-layer the mixed material to reduce the mixing effect. Therefore, there are many factors that affect the mixing speed and mixing effect in the actual mixing process, which makes the mixing process more complicated, and it is difficult to examine them individually. Generally divided into material factors, equipment factors and operating factors.

1) Equipment type The shape and size of the mixer, the internal inserts (baffles, forced stirring, etc.), material and surface conditions affect the mixing effect. A suitable mixer should be selected according to the nature of the material.

(2) Operating conditions The filling amount of the material, the charging method, the mixing ratio, the speed of the mixer and the mixing time affect the mixing effect. The mixing effect is best when the V-shaped mixer's loading amount is about 30% of the container volume. When the rotation speed of the rotary mixer is too low, the particles slide down on the surface of the material layer. If the physical properties of the constituent particles are large, separation will easily occur. When the rotation speed is too high, the centrifugal force of the mouse will rotate with the drum There is almost no mixing effect. Appropriate speed—0.7-0.9 times the critical speed. When the density difference and particle size difference between the components are large, the material with low density or large particle size should be loaded first, and the material with high density or small particle size should be loaded first, and the mixing time should be appropriate.

(3) The particle size distribution, particle morphology and surface state, particle density and bulk density, water content, flowability (angle of repose, internal friction coefficient, etc.), adhesion, cohesiveness, etc. of the powder properties will affect the mixing process. In particular, when there is a significant difference in particle size, particle morphology, density, etc. among the various components, segregation easily occurs during or after mixing, and uniform mixing is lost.

Previous: What Are The Feeding Methods Of The Mixer?

Next: Why Are V Type Mixer Widely Favored By Factories?