How To Maintain The Powder Mixer?

There are many types of mixers that are common in our lives. Among them, Powder Mixer Machine are commonly used. Powder mixers are used in a wide range. Generally, they are mainly used in pharmaceutical, chemical, food, feed, ceramic, metallurgical and other dry powders. Mix materials, granular materials, etc. The whole machine is generally made of stainless steel, and the V-type asymmetric material is used for mixing. This kind of general mixing has no dead angle and high uniform efficiency. The structure of the machine is reasonable and the operation is convenient. The material is made of stainless steel. Made, the inner wall is bright and easy to clean.

Secondly, the amount of displacement between the powder particles during the mixing process will increase. If a large standard mixer is selected for the one-time batch requirement, the mixing time is extended in the mixing process in order to achieve the intention of uniform mixing. It should be noted that the mixer standard is relatively large under severe conditions, and it is difficult to achieve the intention of uniform mixing even if many mixing moments are added. In general, Industrial Powder Mixer are large standard mixers. 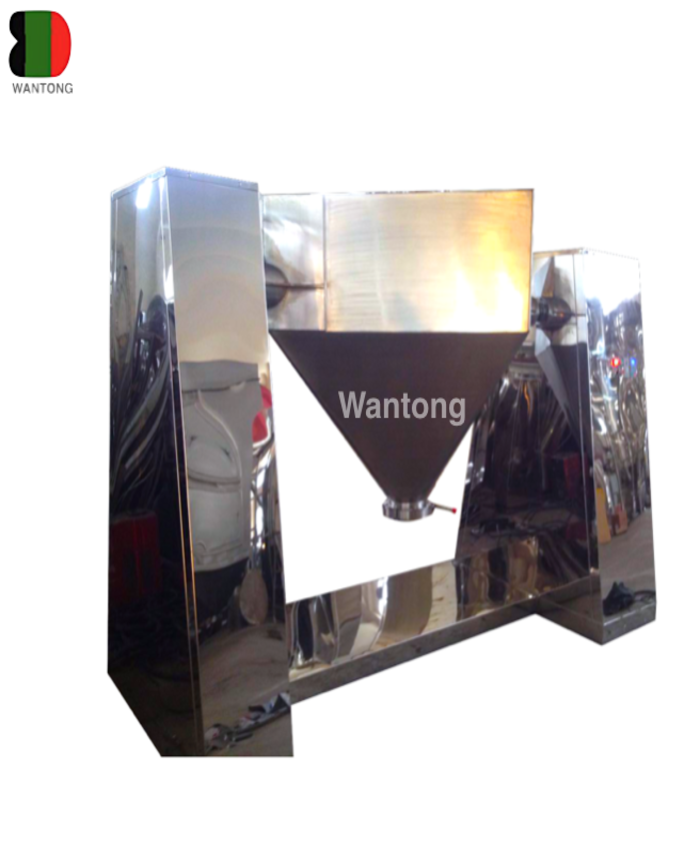 So if the mixer standard is too small, will it affect? Too small a standard of the mixer will also appropriately weaken the mixing ability of the equipment and affect the mixing power. Because the volume of the mixing equipment barrel is small, the accumulation height of the powders participating in the mixing is small, so the gravity pressure between the powder particles in the barrel is small, that is, the powder pressure is small, so the mixing method using the gravity dispersion principle is mixed. Not ambition. Mixing light powder (powder with specific gravity ≤ 0.35) with a small standard mixer will be even worse. Therefore, the standard of the mixer barrel is too small to affect the mixing ability of the mixing equipment, which has a certain influence on the mixing. Therefore, when selecting the mixer, it should not be too large or too small, and it needs to be selected according to our actual needs. The mixer can achieve a better effect, such as the Lab Powder Mixer used for the experiment, the specifications are generally small, and the research can be satisfied.

Let's share with you the maintenance of the powder mixer.

The first is applicable to the ambient temperature of -5oC - 40oC, relative humidity <90%, the temperature is more suitable, need to be placed in a ventilated, dry, clean orientation. At the same time, it is strictly forbidden for underage children to touch the machine without authorization to avoid accidents. The lubrication of the reducer is generally oil-immersed, and it is necessary to maintain the oil storage capacity on the oil mark line, and it is necessary to keep the oil quality clean. If it is used frequently, it must be replaced every three months. When replacing, the gear unit needs to be removed and cleaned before adding new oil. Mixer electrical control parts also need to be kept clean and found to be correct when needed. At the end of each use or stoppage, the material remaining in the V-bucket should be taken out and the remaining powder in each part of the machine should be brushed. If the deactivation time is long, then the V-type mixer needs to be wiped clean and covered with a tarpaulin. The V-type bucket needs to be lightly disassembled, stabilized and lightly placed during assembly and disassembly to avoid deformation and damage. At the same time, it is necessary to regularly check the parts, usually 1-2 times a month. The main items of the project are the dynamic parts, the transmission, the reduction box and other active parts, whether the rotation is sensitive and the wear condition, and the defects should be corrected in time so that the mixing machine can be used normally.

Previous: The Specific Workflow Of The Ribbon Mixer

Next: Basic Knowledge Of The Blender